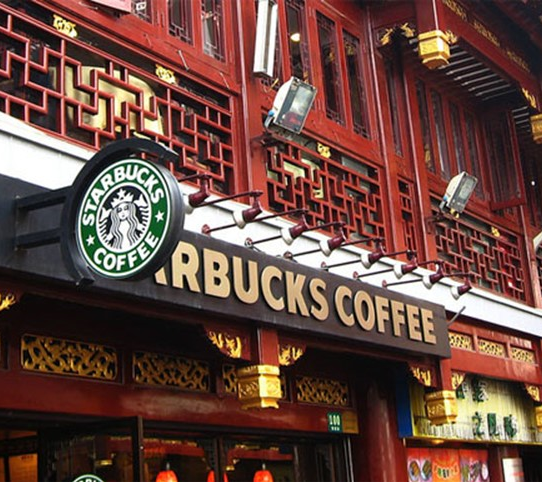 When Starbucks first ventured into the Chinese market in 1999, the opinions, as well as the odds, were against the company. Bringing a coffee franchise to a nation renowned for its tea drinking seemed a fool’s errand.

18 years later, Starbucks is operating over 2,000 stores in 100 cities across the country. How did the company adjust its strategy to the local market – or did it do that at all?

When Starbucks opened its very first store in China World Trade Building in Beijing, the idea of coffee culture or coffee drinking in general was practically nonexistent in the country. As the company’s CEO Howard Schultz recalls: “We had to educate and teach many Chinese about what coffee was – the coffee ritual, what a latte was…So in the early years, we did not make money.”

However, Starbucks did not let skepticism get in the way. The company saw China’s “opening up” and the emerging middle class as fertile ground. As market research revealed, with the younger generation eager to explore the “Western lifestyle”, there was a niche in the market for coffee experience – and that’s what Starbucks delivered. The coffee company basically created the demand – and the market followed.

As the country’s middle class expanded, so did the number of Starbucks coffee shops: when the first store opened in China, its middle class accounted for only 15% of the population. By 2020, it’s expected to account for 50% of all urban dwellers (according to McKinsey Institute).

A “Starbucks experience” in China is quite different from that in the West. Coffee, and especially branded coffee, is still regarded as a luxury and being seen idling your afternoon away at a Starbucks coffee shop with a logoed mug in hand and a piece of cheesecake on a plate in front of you is often viewed as a sign of success. The coffee shops’ spacious interior, comfortable sink-in lounge chairs and up-beat music are also in tune with the younger generation’s desire to look chic and trendy – and, for many, the Starbucks experience offers just that. In a Chinese Starbucks people don’t just grab a cup on the go – it’s a “see and be seen” experience and the coffee shop is a frequently chosen venue for business meetings and even job interviews.

Part of that experience is also the coffee shop’s unique atmosphere – and most of it is the merit of the company’s employees. When entering the Chinese market, Starbucks already planned long term. In order to ensure its signature flair is consistent through all of its coffee shops, the company invested a great amount of money and time into its employees. Starting from a careful recruitment process to extensive employee training and team building programs, the company has built up its barista culture one hire at a time, putting employees at the heart of its brand.

While Starbucks has managed to preserve its “coffee first” identity in China, there were still quite a few changes made to the coffee shop’s drinks and food menu.

For instance, the company has capitalized on China’s tea drinking culture by adding a selection of matcha-based beverages (often referred to as green tea beverages, like a green tea latte) and adding popular local ingredients to its already famous beverages (red bean green tea Frappuccino).

On the food side, Starbucks has indulged the locals’ taste for festival specials: moon cakes during Mid-Autumn Festival and “zongzi” for Dragon Boat Festival have—a mix of the traditional and Starbucks’ modern interpretation–become a welcome tradition with many customers purchasing pricey colorful boxes of goodies as gifts for friends, family and colleagues.

More than that, the company has expanded its in-house cup and mug shop to offer tumblers which are extremely popular in China. Used by the locals on an almost daily basis, the branded cups serve to further popularize Starbucks’ coffee and brand.

A Step Ahead of the Competition

With the rising demand for java, the competition is also intensifying. As international rivals like Costa Coffee as well as local brands scramble to seize market share, Starbucks is thinking big – and different – about its future in China. 2017 will be marked with the opening of the first international Starbucks Roastery and Reserve Tasting Room in Shanghai’s luxurious shopping district – West Nanjing Road. The 2,800 sq meter facility will provide an even more upscale experience catering to current and aspiring coffee connoisseurs. Belinda Wong, head of Starbucks in China, describes the new coffee shop as “the second Disneyland in Shanghai” adding: “It’s going to attract not only people in Shanghai but attract a lot of tourists in China.”

Starbuck’s story in China is a bold tale of careful market research and brand cultivation. Having managed to offer just the right mix of East and West, the coffee giant has turned potential pitfalls to its favor, giving Chinese customers the taste, information and time to develop a liking for its products.