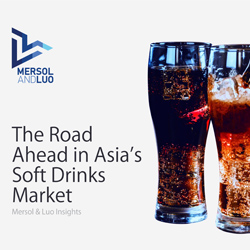 The Road Ahead in Asia’s Soft Drinks Market The soft drinks market in Mainland China is dominated by large and/or inexpensive brands—domestic and global (e.g. Coca Cola). This is changing as disposable incomes continue to rise and consumers demand higher quality and more variety. Relative to its population, China’s soft drinks sector is modest. By comparison, the United States’ soft drinks market is over 7x larger with less than 25% of China’s population. There remains significant room for growth through 2030, well before the market begins to mature.

Contrary to most markets, carbonated beverages do not dominate in Taiwan. Other RTDs are the beverage of choice, with most consumers opting for teas, coffees, bottled water, and the like. Although highly competitive, Taiwan is an attractive market given relatively high disposable incomes and exposure to foreign brands and purchase options.

Singapore offers low barriers to entry and a large tourism and travel industry that helps the market punch above its weight in terms of consumers spending. Soft drinks are no exception. Innovative brands that focus on quality and support a positive lifestyle will be well-received and win market share in an open, yet crowded, market.

Often overlooked, Malaysian consumers’ disposable incomes are higher than those in China, particularly when cost of living is factored in. The market is making the transition from low-cost offerings by large local and global brands to seeking out lesser known brands and flavor profiles. Quality and health are increasingly valued, particularly in wealthy urban areas. Big brands—local and imported—with well-known flavors and styles have dominated markets like China and Malaysia for decades. Smaller, wealthier markets such as Singapore and Hong Kong have led the trend away from this in favor of novel flavors and new takes on old soft drink ideas such as carbonated milk beverages and health-focused tea, fruit, and fusion drinks. As larger Asian markets become wealthier, they are adopting this trend as well, opening up a large long-term opportunity for new brands to meet increased demand.

Soft drink consumption in China, Taiwan, Hong Kong, Singapore, Malaysia and other Asian markets has always been high, yet beverages with lots of sugar has been the norm. With obesity, diabetes, and heart disease on the rise as diets begin to match those in many wealthy economies, more and more consumers are seeking soft drinks with high health benefits, low sugar, and overall better quality. This trend is strongest among young consumers.

Value and affordability are the most important factors for a brand in developing markets where disposable income is limited. As Asia’s largest markets—such as Mainland China and Malaysia—firmly enter a growing club of middle-income countries, they are increasingly favoring higher quality soft drinks with fewer artificial ingredients and a healthier overall profile. This trend is set to continue through 2030—and likely beyond. For quality-focused soft drinks brands, this serves as a new and growing source of demand and sales.

Globally, colas dominate the soft drinks sector. The same is true for Asian markets. Big brands, such as Pepsi and Coke, meet the lion’s share of market demand but this is changing. Smaller brands with innovative branding, novel flavors, or lower sugar are putting pressure on major brands in China, Malaysia, Taiwan, and other markets. Local or regional cola brands that might not otherwise consider exporting to Asia now have an opportunity to enter these markets as demand characteristics shift.

In many wealthy markets sports and energy drinks have become mainstays of urban dwellers, gym-goers, and others looking to keep their energy up throughout the day or simply keep healthy. This trend is already well established in Hong Kong and Singapore. Now it’s finally coming to emerging markets like Mainland China and Malaysia where interest in physical fitness and health is on the rise and increased urbanization is changing lifestyle demands. Large brands, such as Red Bull and Monster are common, but brand loyalty is low, with most consumers willing to try unknown brands or flavors. The market is far from maturity.

Increased demand for health-focused soft drinks is in line with the same global trend. In markets like China, where food and beverage health and safety are ongoing concerns, consumers are willing to dedicate more of their increasing disposable income to beverage that will support a healthy lifestyle. With few local brands serving this segment, the market is wide open for foreign brands to offer new health-focused soft drinks to Asian markets.

The Case of Coca Cola in Malaysia

Founded in 1886, Coca Cola is one of the oldest and largest producers of soft drinks in the world, present in nearly all markets. Aside from its main brand under the same name, it owns numerous other food and beverage brands, many of them specific to local markets.

Malaysia has traditionally been dominated by a few major soft drink distributors, though this has begun to change in recent years. For this reason, in 1979 when Coca Cola decided to enter the market, it did so via a franchise agreement with Malaysia’s largest soft drinks bottling and distribution company, Fraser & Neave.

At the same time, it chose to target a specific segment of Malaysia’s consumer market: young people 13-24 living in multicultural urban markets. The brand was marketed as cool and bringing happiness to those who drank its products, supporting a positive lifestyle.

Doing so allowed the brand to quickly win a significant share of the market, getting ahead of local and other potential competitors. The brand’s build in advantages as a player with a global footprint aside, Coca Cola dually recognized the potential of the market and that realizing that potential necessarily required forming a strong relationship with younger consumers whose brand loyalties were weak and long-term purchase habits not yet formed.

The foreseeable future of soft drink demand in Asia belongs to emerging markets in the region, such as Mainland China and Malaysia.

At the same time, high-income markets like Singapore, Taiwan, and Hong Kong will remain stable sources of demand, particularly for higher-quality products.

Overall, demand is shifting away from high-sugar traditional soft drinks in favor of novel flavors, health-focused beverages that support consumers’ lifestyle goals. Similarly, more consumers are seeking out sports and energy drinks that enable what many consumers consider a high energy and healthy modern lifestyle This is particularly true among young, urbane, well-educated consumers in mega cities like Beijing, Shanghai, Kuala Lumpur, and the like.