The Future of Alcoholic Ready-to-Drink Beverages in China The ready-to-drink market for alcohol in China is modest but growing rapidly.

In 2013, sales of pre-mixed cocktails totaled US$158 million. Growth since then has been strong. By the end of 2020, it will surpass US$4 billion in sales. Sales volumes are expected to surge to 150 million liters within the next few years.

RTDs are particularly popular among light drinkers in China. They are convenient to consume, have a lower alcohol content, and less expensive than cocktails offered in bars. It therefore comes as little surprise that off-trade sales channels, such as convenience stores, account for the lion’s share of sales nationally.

Among all RTD brands present in China, RIO, a local brand, is by far the most popular and has the biggest market share. Their products are available in more than 260 major prefecture-level cities and 1,300 county-level cities in the region. RIO alcopops are also sold in neighboring Asian countries, as well as Italy and Spain. Although dominant, this is set to change as demand for the category continues to grow and more foreign brands make inroads into the market.

Who are Drinking RTDs?

Initially a niche category, the number of Chinese consumers of RTDs has boomed in recent years. Young women—typically in the their 20s or 30s— large cities are leading the way.

These consumers want the option to drink casually with friends or work peers without committing themselves to the heavy-drinking evening occasions traditionally more common in China. This is part of a broader trend in China among many, primarily younger, consumers seeking lower alcohol and healthier alcohol options.

Branding, packaging, and flavors need to match these lifestyle goals. To that end, the most successful alcoholic RTD brands in China offer sweet or light easy-to-drink flavors and present their products in colors and packaging that match the desired lifestyle (fun and healthy) and drinking format (convenient) of these consumers. An emerging niche includes beverages with particularly healthful options, such as yogurt or high percentages of real fruit juice. 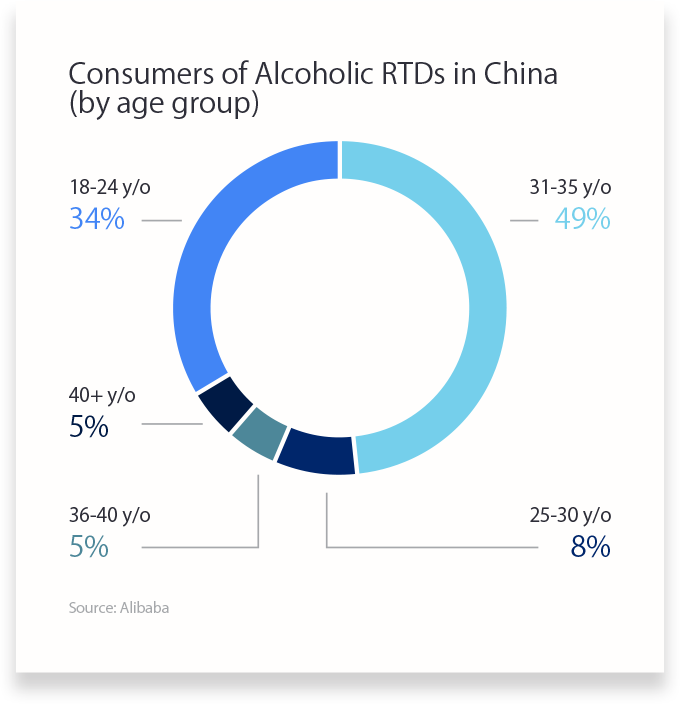 The Case of Rio

RIO is owned by Shanghai Bacchus Limited Company, a subsidiary of the China-based beverage and fragrance company, Shanghai Bairun Investment Holding Group Co., Ltd.  It was first introduced in China in 2003 and has grown to become one of the largest alcoholic RTD brands in the Asia Pacific region. Currently, RIO accounts for 40% of China’s ready-to-drink market.

The brand name RIO was chosen to evoke the tropical feel of Brazil’s Rio de Janeiro. Unlike the popular Chuhai cocktails in Japan, these RTDs were first sold in glass bottles instead of aluminum cans. RIO is available anywhere in China and other Asian markets like Myanmar and Singapore. The brand has been a major sponsor of Chinese dramas, movies and variety shows.

The success of RIO has boosted RTD cocktail consumption in China. In 2015, when most major players exited from the pre-mixed cocktail segment, it retained its marketability by pouring money into marketing. A core marketing method for RIO is video advertising. These ads were shown in popular TV series and variety shows, as well as posted on Weibo and WeChat, for maximum exposure.

RIO’s campaigns put emphasis on how the alcopops are suitable for parties due to their low alcohol content. It targets a specific consumer group, China’s younger generations. Some of the personalities appointed by the brand to serve as spokespersons include popular Chinese actors. RIO also has a  large online presence on Chinese e-commerce platforms, such as JD.com and Tmall to reach more, especially younger, consumers.

Building on this success in appealing to younger consumers, the brand partnered with Hello Kitty in 2014, introducing limited edition RIO bottles in different shades of pink. It even partnered with a popular dating show as part of its wider promotional effort. To cater to male drinkers, RIO launched a line with higher alcohol content in 2016. Soon after, it began releasing alcopops in slim cans for a more modern look.

The Case of Diageo

The Asia Pacific region represents 20% of Diageo’s net sales. China is one of its biggest markets. To meet consumer demand, the company offers a broad portfolio at almost every price point and in every category. For premixed drinks, some of its brands include Archers, Pimm’s, Jeremiah Weed and Smirnoff Cocktails.

Diageo’s success has depended on its carefully planned campaigns and ability to keep up with trends. In 2013, the company rolled out a US$ 2.5 million TV ad campaign to promote its pre-mixed drinks portfolio as the “number one choice for the casual get together occasion.” It also launched its price-marked packs (PMPs) in 2017 to improve positive price perception and ease of shopping for customers in the convenience sector.

Diageo announced in 2018 that some of its canned RTDs would come with edible straws—a move made to satisfy the needs of a more environmentally conscious generation of consumers. Diageo also announced to phase out plastic straws and stirrers worldwide, and to only use completely recyclable plastic by 2025.

China’s RTD alcohol sector has grown nearly 30-fold over the last 10 years and is set to enjoy strong year-on-year growth for years to come.

Demand is driven by young consumers, who account for over 80% of consumption. As these consumers head into their peak consuming years, they will continue to support a growing sector and give brands the opportunity to expand into more premium offerings.

Although dominated by a few large brands—such as RIO and Diageo, the sheer growth rate of the sector and size of the Chinese market means more space will be open to small, medium, and niche brands to enter the market.

Brands focusing on novel or easy-to-drink flavors and delivering a fun, healthy, and environmentally friendly lifestyle will be particularly well-positioned to take advantage of all these trends.