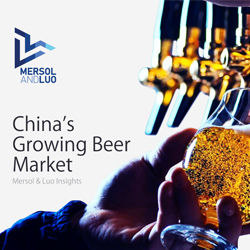 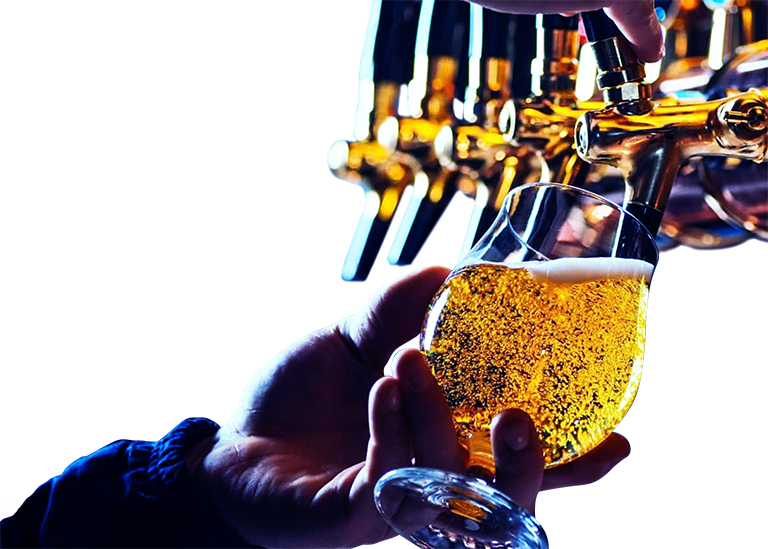 This paper offers a broad view of Mainland China’s beer market as of 2020, taking into account established and emerging trends as well as the impact of political headwinds and COVID-19.

It also offers a more granular view of each major imported beer category (e.g. IPA), how each is performing, advantages and disadvantages in the market, and overall short-to-medium term outlook.

In addition to indicative real in-market case studies, this paper provides a firm understanding of the distinct consumer types that have emerged among Chinese beer consumers, their habits, general spending power, and how they are likely to shape demand.

Beer represents 75% of the total amount of alcohol consumed in China by volume.

Imports of beer into China reached nearly US$1 Billion by the end of 2019. Demand for higher quality beers—and the willingness to pay—has increased with Chinese consumer’s disposable incomes. Year-on-year growth in demand for foreign beers have followed. 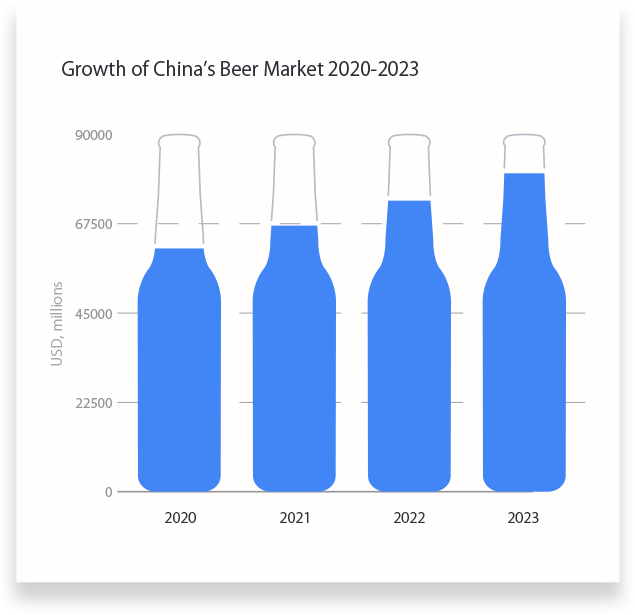 Mass market beer is the largest sector, accounting for over 85% of the market. Most are local brands, inexpensive, and ubiquitous across regions. Leisure beers—those offering better quality for good value—account for around 10% of the market. Craft, novelty, and other premium beers make up about 5% of the market. Although still small, they have gone from nearly unheard of to driving local beer scenes in major coastal cities in a matter of 10 years.

Europe continues to lead among imported beers by region with nearly 75% of the total. Among these, Germany remains first among other large beer-producing countries, accounting for over US$ 800 Million in beer retail sales on China in 2019. The US stands out as a large producer with a relatively small footprint in the local market. This suggests considerable room for growth.

Although other beer varietals are making inroads into China’s beer market, pale Lagers, such as those sold by Tsingtao and Snow, still dominate. Pale lagers are seen as the standard beer in China. Foreign beer brands carrying pale lagers can tap into a well-established market with minimal investment in educating consumers. Those imported pale lagers boasting uni.que characteristics are particularly likely to be able to carve out a profitable niche in an already large and growing sector of China’s beer market.

The India Pale Ale (IPA) wave came to China via Hong Kong several years ago and has swept through microbreweries and bars carrying craft and other high-quality beers. Although IPAs are not for everyone, they are particularly popular among young consumers with overseas experience. These savvy drinkers, in particular, have led the way in bringing IPAs to China, developing localized varietals, and educating other consumers on options available and how best to enjoy them. IPAs are leading the way for imported beer varietals with lots of room for growth yet.

Many would-be beer enthusiasts do not care for the bitterness of IPAs or the flavors found in classic pale ales. Fruit beers—many from Belgium and Germany—are stepping into a previously untapped consumer group. These drinkers are looking for sweeter beers or those with a refreshingly balanced sweet and sour flavor profile. Although still primarily found in large cities and high-end bars and restaurants, their availability is increasing and, with this, awareness, interest, and demand.

Ales are the unsung heroes of classic zymology. The typically lightly sweet, full-bodied and even fruity taste of ales is appealing in a market dominates by pale lagers and more bitter IPAs and dark beers. Easy-drinking ales—across flavor profiles—are rapidly increasing their share of China’s beer market, particularly as more Chinese drinkers are looking something more flavorful than the typical Tsingtao while still being easy to drink. Western breweries, in particular, with their long history of ale brewing, are well positioned to take advantage of this growing opportunity.

Non-alcoholic beers have enjoyed high double-digit—or even triple digit—growth in China over the past 5 years. Chinese beer drinkers—particularly younger ones in large cities—want healthier options they can still enjoy socially. Foreign brands, such as Uwe—with a modern take on non-alcoholic beer, have opened up a growing space for innovative brands delivering good quality and flavor.

Types of Beer Consumers in China

This group is dominated by younger Chinese consumers who drink beer for pleasure. Due to their increased exposure to global trends, they have upended age-old habits in China’s beer market. These drinkers are abandoning their parents’ tried-and-tested pale lagers, instead, preferring those of other styles (e.g. IPA) and higher quality. They see drinking beer as a social opportunity and a way to relax after a long day or week.

Young consumers are the largest beer drinking segment in China, though those that fall into this particular group tend to cluster in larger cities. Recently, an increasing number of these drinkers have turned to beers with low alcohol or no alcoholic content, “healthier” brews. Brand loyalty is not strong among these consumers, so companies looking to attract them need to focus on other factors.

These are China’s core beer drinkers, primarily male and combine both relatively young (18-29) and relatively old drinkers (60+). They favor known brands and the pale lager styles typical of these in China. Drinkers in this category do so casually, and as part of ritual activities, such as dinner with co-workers, watching sports during which the purpose of drinking is to enhance the experience rather than the experience itself.

Despite preferring well-known local brands and lagers, foreign brands such as Carlsberg, have proven there’s room for new brands and some differentiation that still appeals to this group of beer drinkers. For any brands targeting this group, it will be important to incorporate these factors into a successful market strategy.

These are China’s beer aficionados with a preference for artisanal and specialty beers. This group strives to educate themselves on all aspects of the industry, from the brewing process to product unveiling and tastings. These drinkers serve as opinion leaders and influencers, recommending and educating friends, family, and co-workers on which beers to try. As with The Explorers, this group drinks beer as a way to relax, to enjoy, and be engaged.
The Enthusiasts are at the forefront of China’s Craft beer movement.

The Case of AB InBev

Anheuser-Busch InBev is one of the world’s largest breweries. Its biggest market in Asia is China, accounting for the lion’s share of all imported beers in the country. The company owns, in full or in part, major brands like Budweiser and Harbin Ice, which are popular in China. In 2014, it introduced its Corona beer to further strengthen its portfolio in the country.

Since entering Chinese, Corona has been steadily gaining loyal followers. In 2016, the brand sold 24 million hectoliters of beer. In 2018 Corona became the number one imported beer brand in China and continues to enjoy strong growth.

Corona’s success in China is due to multiple factors. The first one is timing. AB InBev introduced the brand to the market when demand for premium beer was high and rapidly increasing disposable incomes among local consumers.

Second, the company decided to hire a Chinese brand agency to handle Corona’s overall brand communications in mainland China. This allowed the company to establish effective sales channels and develop a marketing strategy that resonated with Chinese corporate buyers and end consumers.

The Case of Fosters

Foster’s Group is a multinational beverage company based in Australia. It sells over 100 million cases of beer annually. The company created the Foster’s Lager, a popular beer brand distributed worldwide. In 2011, SABMiller bought Foster’s Group and renamed it Carlton & United Breweries. It then became a direct subsidiary of Anheuser-Busch InBev when the latter took over SABMiller in 2016.

Foster’s Group entered the Chinese beer market in 1993. It had breweries located in Shanghai, Guangdong and Tianjin. Aside from the Foster’s Lager, it also distributes localized brands such as Shanghai Lager, Guangming, Qing Yi and Yi Hao. In 1999, the company sold its Tianjin and Guangzhou headquarters. Seven years later, it announced not only the sale of its last remaining office in Shanghai, but its final exit from the Asian beer market.

The company was known for producing premium beers, using imported ingredients like barley and malt. Its brews costed five to six times more than that of local brands. The people behind Foster’s Group failed to consider local economic conditions. In the early 1990s, the level of disposable income in the country was low compared to the price of Foster’s beers.

Additionally, competition was fierce in the beer market. International companies struggled to enter the market which was dominated by local breweries. The Chinese generally had little knowledge about foreign brands, except for the popular ones like Budweiser and Carlsberg. The beers being sold also did not fit local tastes with recipes remaining geared toward tastes in Australia and Western markets. As a result, Foster’s Group had difficulty building awareness of and demand for its brand among local consumers.

In general, Chinese consumers are looking to move beyond the staid pale lagers that have dominated China’s beer market for decades.

Beer drinkers’ habits and preferences are divided by both age, geographic location, and how they enjoy their beers. There are also sub-sets within each age group. As demonstrated in both the case of Corona and Foster’s, understanding the market and how your brand and flavor profile fits into it, are critical to developing a strategy that will lead to long-term success in China.

Across the board, the future for imported beers in China is bright.